Sitting outside this morning with my Mom and Brandy. I was trying to get a photo of her looking at me but she wouldn’t cooperate. My Mom even held a piece of bacon up over my head and she looked everywhere but at me. It seems like she knew I was trying to take her picture!

Mom is eating her breakfast. She brought B-Girl out while I was cooking. Brandy wanted to stay out so we took up camp in the back yard. It is a little windy. I don’t know if it is just windy or a storm is brewing up. I’ve been pretty lucky with the weather on my time off.

Monday, Memorial Day, I spent some time hanging out with one of my dear friends, Andrea. She showed me a lot of the neat things she was making and some she had already made. She also showed me some things she had pinned on Pinterest. Pinterest is so addicting!

Tuesday I worked on the yard. I sprayed my crabapple tree and a few bushes and the base of my large pine tree. The bush behind the crabapple and the crabapple have some type of algae or maybe it’s blight. No one could really tell me so I bought something that deals with both. I also sprayed my lawn for weeds. I had Tru-green for a year and then switched to Scott’s because my lawn looked horrible. I had Scott’s for two years and my lawn started looking worse than it ever had with not only the weeds but the moss and algae growing all throughout the lawn. 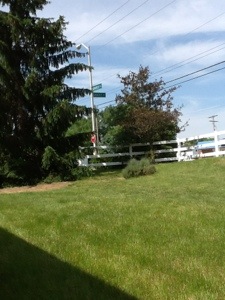 This is a picture of my trees.

I think I overdid it because I came in the house, got in the shower and immediately felt sick. I had to get out of the shower and lay down for about an hour before I could get back in the shower and get dresses. I was supposed to take my Mom grocery shopping but that didn’t happen. I battled an upset stomach all day.

Today we are going to battle grocery shopping. I want to go before people start getting off of work. I’m not fond of busy, crowded stores and I live on a side of town where a lot of ethnic people live and they take their entire families grocery shopping. I probably wouldn’t even mind if the kids were kept under control but most of the time I get ran into, pushed or everyone stands in the middle of the aisles and no one tries to move even if you say excuse me.

Ok, got that out of my system!

Embracing individuality within a community.

Art of Living on the Road (Italy!)

Midwest Craft Con is a conference and retreat for craft enthusiasts and creative entrepreneurs with educational classes and DIY hands-on workshops. We return February 28 – March 1, 2020!

The Magic Behind Reality

A daily selection of the best content published on WordPress, collected for you by humans who love to read.

The World according to Dina

Notes on Seeing, Reading & Writing, Living & Loving in The North

Life is the journey, not the destination.